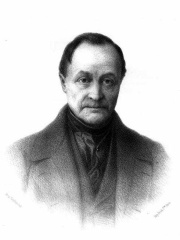 Isidore Marie Auguste François Xavier Comte (French: [o'ɡyst kɔ̃t] (listen); 19 January 1798 – 5 September 1857) was a French philosopher and writer who formulated the doctrine of positivism. He is often regarded as the first philosopher of science in the modern sense of the term. Comte's ideas were also fundamental to the development of sociology; indeed, he invented the term and treated that discipline as the crowning achievement of the sciences.Influenced by the utopian socialist Henri de Saint-Simon, Comte developed positive philosophy in an attempt to remedy the social disorder caused by the French Revolution, which he believed indicated imminent transition to a new form of society. Read more on Wikipedia

Auguste Comte is most famous for his positivist philosophy, which states that the only true knowledge is scientific knowledge.

Among philosophers, Auguste Comte ranks 35 out of 1,089. Before him are Democritus, Diogenes, David Hume, Laozi, Martin Heidegger, and Søren Kierkegaard. After him are Sun Tzu, Plutarch, Al-Ghazali, Michel de Montaigne, Ludwig Wittgenstein, and Maria Montessori.