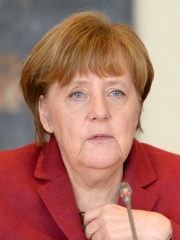 Angela Dorothea Merkel (pronounced [aŋˈɡeːla doʁoˈteːa ˈmɛʁkl̩] (listen); née Kasner; born 17 July 1954) is a German politician who been serving as the chancellor of Germany since 2005. She served as the leader of the Opposition from 2002 to 2005 and as the leader of the Christian Democratic Union (CDU) from 2000 to 2018. A member of the CDU, Merkel is the first female chancellor of Germany. Read more on Wikipedia

Angela Merkel is most famous for being the Chancellor of Germany. She is the first woman to hold this position and has been in office since 2005.

New York Times
What's Next for Angela Merkel?
After 16 years as chancellor, there is no shortage of speculation about what her second act will be.
Katrin Bennhold and Melissa Eddy
CBC News
Olaf Scholz in line to succeed Angela Merkel as chanceller as German parties strike deal
Three German parties have reached a deal to form a new government that will end the era of longtime Chancellor Angela Merkel, according to Olaf Scholz, who is poised to replace her.
The Associated Press
Yahoo Entertainment
Olaf Scholz to succeed Angela Merkel as German chancellor
Olaf Scholz, a Social Democrat, will serve as Germany's new chancellor, replacing Angela Merkel and marking the first time in 16 years that the country will ...
The Hill
Voxeurop.eu
Jean-Claude Juncker: ‘There was somewhat of a European reflex in Angela Merkel’
EuroPod has made available the full interview of the EU Commission’s former head on Germany’s outgoing Chancellor.
f_barca

Among politicians, Angela Merkel ranks 118 out of 15,710. Before her are Yasser Arafat, Mark Antony, Kim Jong-il, Uthman, Harald Fairhair, and Marcus Licinius Crassus. After her are Joseph II, Holy Roman Emperor, Otto I, Holy Roman Emperor, Henry V of England, Clovis I, Louis XIII of France, and Kösem Sultan.