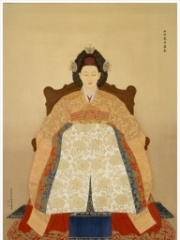 Empress Myeongseong or Empress Myung-Sung (17 November 1851 – 8 October 1895), known informally as Queen Min, was the first official wife of Gojong, the twenty-sixth king of Joseon and the first emperor of the Korean Empire. The government of Meiji Japan (明治政府) considered Empress Myeongseong (明成皇后) an obstacle to its overseas expansion. Efforts to remove her from the political arena, orchestrated through failed rebellions prompted by the father of King Gojong, the Heungseon Daewongun (an influential regent working with the Japanese), compelled her to take a harsher stand against Japanese influence.After Japan's victory in the First Sino-Japanese War, Joseon Korea came under the Japanese sphere of influence. Read more on Wikipedia

Since 2007, the English Wikipedia page of Empress Myeongseong has received more than 683,280 page views. Her biography is available in 30 different languages on Wikipedia making her the 1,376th most popular politician.

Among politicians, Empress Myeongseong ranks 1,370 out of 14,801. Before her are Bernie Sanders, Lucullus, Maria II of Portugal, Emperor Guangwu of Han, Olaf II of Denmark, and Khosrow II. After her are Nicolás Maduro, Ferenc Szálasi, Frank-Walter Steinmeier, Antiochus I Soter, Gwanghaegun of Joseon, and Marie François Sadi Carnot.