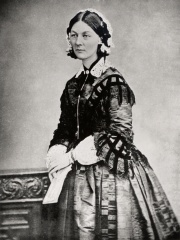 Florence Nightingale (; 12 May 1820 – 13 August 1910) was an English social reformer, statistician and the founder of modern nursing. Nightingale came to prominence while serving as a manager and trainer of nurses during the Crimean War, in which she organised care for wounded soldiers at Constantinople. She gave nursing a favourable reputation and became an icon of Victorian culture, especially in the persona of "The Lady with the Lamp" making rounds of wounded soldiers at night.Recent commentators have asserted that Nightingale's Crimean War achievements were exaggerated by the media at the time, but critics agree on the importance of her later work in professionalising nursing roles for women. Read more on Wikipedia

Florence Nightingale is most famous for being a nurse during the Crimean War. She was also instrumental in the development of modern nursing.

Among physicians, Florence Nightingale ranks 2 out of 509. Before her are Hippocrates. After her are Galen, Paracelsus, Ignaz Semmelweis, Edward Jenner, Josef Mengele, Robert Koch, L. L. Zamenhof, Basil of Caesarea, Albert Schweitzer, and Andreas Vesalius.

Among PHYSICIANS In Italy