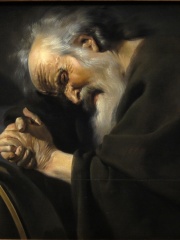 Heraclitus of Ephesus (; Greek: Ἡράκλειτος ὁ Ἐφέσιος, translit. Hērákleitos ho Ephésios, pronounced [hɛː.rá.kleː.tos ho e.pʰé.si.os]; "Glory of Hera" c. 535 – c. 475 BC, fl. 500 BC) was an Ancient Greek, pre-Socratic, Ionian philosopher and a native of the city of Ephesus, which was then part of the Persian Empire. His appreciation for wordplay and oracular expressions, as well as paradoxical elements in his philosophy, earned him the epithet "The Obscure" from antiquity. Read more on Wikipedia

Heraclitus is most famous for the saying "you cannot step into the same river twice."

Page views of Heraclituses by language

Among philosophers, Heraclitus ranks 22 out of 1,089. Before him are Thomas Aquinas, Georg Wilhelm Friedrich Hegel, Montesquieu, Arthur Schopenhauer, Thomas Hobbes, and Epicurus. After him are Baruch Spinoza, Erasmus, Thales of Miletus, Seneca the Younger, Friedrich Engels, and Averroes.