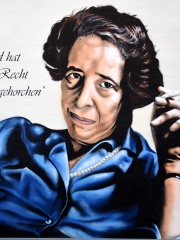 Hannah Arendt (, US also , German: [ˈaːʁənt]; 14 October 1906 – 4 December 1975) was a political philosopher, author, and Holocaust survivor. She is widely considered to be one of the most influential political theorists of the 20th century.Arendt was born in Linden, which later became a district of Hanover, in 1906, to a Jewish family. At the age of three, her family moved to Königsberg, the capital of East Prussia, so that her father's syphilis could be treated. Read more on Wikipedia

Hannah Arendt is most famous for her book "Eichmann in Jerusalem: A Report on the Banality of Evil."

Among philosophers, Hannah Arendt ranks 53 out of 1,081. Before her are Ludwig Wittgenstein, John Amos Comenius, Zeno of Elea, Empedocles, Karl Popper, and Michel Foucault. After her are Lucretius, Plotinus, Henri Bergson, Anaxagoras, Herbert Spencer, and Mikhail Bakunin.