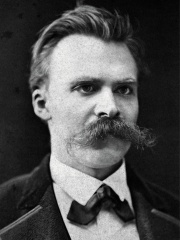 Friedrich Wilhelm Nietzsche (; German: [ˈfʁiːdʁɪç ˈvɪlhɛlm ˈniːtʃə] (listen) or [ˈniːtsʃə]; 15 October 1844 – 25 August 1900) was a German philosopher, cultural critic and philologist whose work has exerted a profound influence on modern intellectual history. He began his career as a classical philologist before turning to philosophy. He became the youngest person ever to hold the Chair of Classical Philology at the University of Basel in 1869 at the age of 24. Read more on Wikipedia

Nietzsche was a German philosopher who is most famous for his idea of the Übermensch.

Among philosophers, Friedrich Nietzsche ranks 13 out of 1,081. Before him are Gautama Buddha, Immanuel Kant, Jean-Jacques Rousseau, Avicenna, John Locke, and Niccolò Machiavelli. After him are Francis Bacon, Augustine of Hippo, Thales of Miletus, Thomas Aquinas, Georg Wilhelm Friedrich Hegel, and Montesquieu.