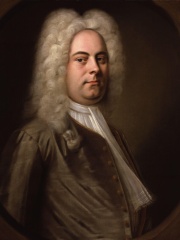 George Frideric (or Frederick) Handel (; born Georg Friederich Händel [ˈɡeːɔʁk ˈfʁiːdʁɪç ˈhɛndl̩] (listen); 23 February 1685 (O.S.) [(N.S.) 5 March] – 14 April 1759) was a German, later British, Baroque composer who spent the bulk of his career in London, becoming well known for his operas, oratorios, anthems, concerti grossi and organ concertos. Handel received important training in Halle and worked as a composer in Hamburg and Italy before settling in London in 1712; he became a naturalised British subject in 1727. He was strongly influenced both by the great composers of the Italian Baroque and by the middle-German polyphonic choral tradition. Read more on Wikipedia

Since 2007, the English Wikipedia page of George Frideric Handel has received more than 3,145,160 page views. His biography is available in 122 different languages on Wikipedia making him the 11th most popular composer.