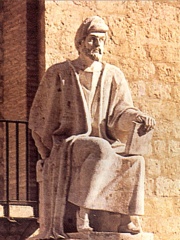 Ibn Rushd (Arabic: ابن رشد; full name in Arabic: أبو الوليد محمد ابن احمد ابن رشد, romanized: Abū l-Walīd Muḥammad Ibn ʾAḥmad Ibn Rušd; 14 April 1126 – 11 December 1198), often Latinized as Averroes (English: ), was an Andalusian polymath and jurist who wrote about many subjects, including philosophy, theology, medicine, astronomy, physics, psychology, mathematics, Islamic jurisprudence and law, and linguistics. The author of more than 100 books and treatises, his philosophical works include numerous commentaries on Aristotle, for which he was known in the Western world as The Commentator and Father of Rationalism. Read more on Wikipedia

Since 2007, the English Wikipedia page of Averroes has received more than 2,222,559 page views. His biography is available in 103 different languages on Wikipedia (up from 98 in 2019). Averroes is the 28th most popular philosopher, the 7th most popular biography from Spain (up from 11th in 2019) and the 2nd most popular Spanish Philosopher.

Averroes is most famous for his commentaries on Aristotle.

Page views of Averroes by language

Among philosophers, Averroes ranks 28 out of 1,081. Before him are Arthur Schopenhauer, Epicurus, Seneca the Younger, Erasmus, Auguste Comte, and Friedrich Engels. After him are Heraclitus, Parmenides, Baruch Spinoza, Martin Heidegger, Anaximander, and Al-Ghazali.

Among people born in 1126, Averroes ranks 1. After him are William I of Sicily, Khaqani, Mieszko III the Old, Peter I of Courtenay, Michael the Syrian, John Doukas, Sibylla of Burgundy, and Anvari. Among people deceased in 1198, Averroes ranks 1. After him are Pope Celestine III, Constance, Queen of Sicily, Marie of France, Countess of Champagne, William III of Sicily, Al-Aziz Uthman, Sophia of Minsk, Dulce of Aragon, Frederick I, Duke of Austria, Eustathius of Thessalonica, and Ruaidrí Ua Conchobair.