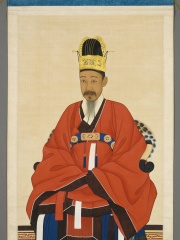 Heungseon Daewongun (흥선대원군, 興宣大院君, 21 December 1820 – 22 February 1898; lit. 'Grand Internal Prince Heungseon'), also known as the Daewongun (대원군, 大院君), Guktaegong (국태공, 國太公, "The Great Archduke") or formally Internal King Heungseon Heonui (흥선헌의대원왕, 興宣獻懿大院王) and also known to contemporary western diplomats as Prince Gung, was the title of Yi Ha-eung, the regent of Joseon during the minority of Emperor Gojong in the 1860s and until his death a key political figure of late Joseon Korea. Daewongun literally translates as "prince of the great court", a title customarily granted to the father of the reigning monarch when that father did not reign himself (usually because his son had been adopted as heir of a relative who did reign). Read more on Wikipedia

The Heungseon Daewongun was the father of King Gojong, the last king of the Joseon Dynasty. He was instrumental in the modernization of Korea in the late 19th century. He is most famous for his role in the Gabo Reforms, which were a series of reforms that allowed for modernization and Westernization.

Among politicians, Heungseon Daewongun ranks 2,858 out of 15,577. Before him are Stefan Uroš V, Marcus Atilius Regulus, Lekë Dukagjini, Alfonso III of Aragon, Juvénal Habyarimana, and Herschel Grynszpan. After him are Francisco Macías Nguema, Emperor Zhao of Han, Wang Xizhi, Frederick II, Elector of Saxony, Gevherhan Sultan, and Henry I of Navarre.