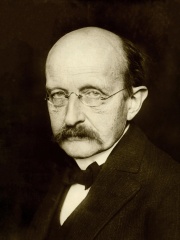 Max Karl Ernst Ludwig Planck (English: , German: [maks ˈplaŋk] (listen); 23 April 1858 – 4 October 1947) was a German theoretical physicist whose discovery of energy quanta won him the Nobel Prize in Physics in 1918.Planck made many substantial contributions to theoretical physics, but his fame as a physicist rests primarily on his role as the originator of quantum theory, which revolutionized human understanding of atomic and subatomic processes. In 1948, the German scientific institution Kaiser Wilhelm Society (of which Planck was twice president) was renamed Max Planck Society (MPG). Read more on Wikipedia

Max Planck is most famous for his work in quantum physics. He was able to show that light is not a continuous wave, but instead comes in packets of energy called quanta.