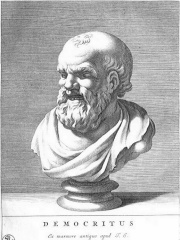 Democritus (; Greek: Δημόκριτος, Dēmókritos, meaning "chosen of the people"; c. 460 – c. 370 BC) was an Ancient Greek pre-Socratic philosopher primarily remembered today for his formulation of an atomic theory of the universe.Democritus was born in Abdera, Thrace, around 460 BC, although there are disagreements about the exact year. His exact contributions are difficult to disentangle from those of his mentor Leucippus, as they are often mentioned together in texts. Read more on Wikipedia

Democritus is most famous for his atomic theory.

Page views of Democrituses by language

Among philosophers, Democritus ranks 21 out of 1,081. Before him are Augustine of Hippo, Thales of Miletus, Thomas Aquinas, Georg Wilhelm Friedrich Hegel, Montesquieu, and Thomas Hobbes. After him are Arthur Schopenhauer, Epicurus, Seneca the Younger, Erasmus, Auguste Comte, and Friedrich Engels.

Among people born in 460 BC, Democritus ranks 2. Before him is Hippocrates. After him are Thucydides, Diogenes of Apollonia, Critias, Prodicus, and Verginia. Among people deceased in 360 BC, Democritus ranks 1. After him are Agesilaus II, Atropates, Agnodice, Campaspe, Dinocrates, Aeschines of Sphettus, Artabazos II, Lais of Corinth, Polykleitos the Younger, Leontion, and Anniceris.