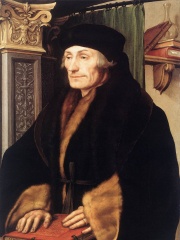 Desiderius Erasmus Roterodamus (; ([ ˌdeːziˈdeːriʏs eˈrɑsmʏs]) English: Erasmus of Rotterdam or Erasmus; 28 October 1466 – 12 July 1536) was a Dutch philosopher and Catholic theologian who is considered one of the greatest scholars of the northern Renaissance. As a Catholic priest, he was an important figure in classical scholarship who wrote in a pure Latin style. Among humanists he was given the sobriquet "Prince of the Humanists", and has been called "the crowning glory of the Christian humanists". Read more on Wikipedia

Since 2007, the English Wikipedia page of Erasmus has received more than 2,846,557 page views. His biography is available in 94 different languages on Wikipedia (up from 93 in 2019). Erasmus is the 25th most popular philosopher (down from 24th in 2019), the 4th most popular biography from Netherlands (up from 5th in 2019) and the most popular Dutch Philosopher.

Page views of Erasmuses by language

Among philosophers, Erasmus ranks 25 out of 1,081. Before him are Montesquieu, Thomas Hobbes, Democritus, Arthur Schopenhauer, Epicurus, and Seneca the Younger. After him are Auguste Comte, Friedrich Engels, Averroes, Heraclitus, Parmenides, and Baruch Spinoza.

Among PHILOSOPHERS In Netherlands