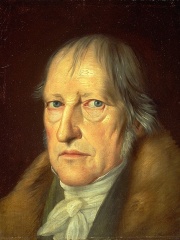 Georg Wilhelm Friedrich Hegel (; German: [ˈɡeːɔʁk ˈvɪlhɛlm ˈfʁiːdʁɪç ˈheːɡl̩]; 27 August 1770 – 14 November 1831) was a German philosopher considered one of the most important figures in German idealism. He is one of the fundamental figures of Western philosophy, with his influence extending to the entire range of contemporary philosophical issues, from aesthetics to ontology to politics, both in the analytic and continental tradition.Hegel's principal achievement was his development of a distinctive articulation of idealism, sometimes termed absolute idealism, in which the dualisms of, for instance, mind and nature and subject and object are overcome. His philosophy of spirit conceptually integrates psychology, the state, history, art, religion and philosophy. Read more on Wikipedia

Georg Wilhelm Friedrich Hegel is most famous for his dialectical philosophy, which is a system of thought that moves through thesis, antithesis, and synthesis.

Among philosophers, Georg Wilhelm Friedrich Hegel ranks 17 out of 1,089. Before him are Niccolò Machiavelli, Augustine of Hippo, John Locke, Francis Bacon, Pythagoras, and Thomas Aquinas. After him are Montesquieu, Arthur Schopenhauer, Thomas Hobbes, Epicurus, Heraclitus, and Baruch Spinoza.