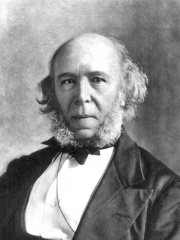 Herbert Spencer (27 April 1820 – 8 December 1903) was an English philosopher, psychologist, biologist, anthropologist, and sociologist famous for his hypothesis of social Darwinism. Spencer originated the expression "survival of the fittest", which he coined in Principles of Biology (1864) after reading Charles Darwin's 1859 book On the Origin of Species. The term strongly suggests natural selection, yet Spencer saw evolution as extending into realms of sociology and ethics, so he also supported Lamarckism.Spencer developed an all-embracing conception of evolution as the progressive development of the physical world, biological organisms, the human mind, and human culture and societies. Read more on Wikipedia

Herbert Spencer is most famous for his theory of evolution.

Among philosophers, Herbert Spencer ranks 58 out of 1,081. Before him are Michel Foucault, Hannah Arendt, Lucretius, Plotinus, Henri Bergson, and Anaxagoras. After him are Mikhail Bakunin, Edmund Husserl, Gorgias, Pliny the Elder, Ludwig Feuerbach, and Peter Abelard.