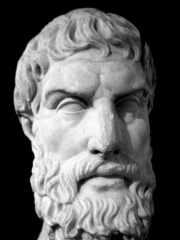 Epicurus (; Greek: Ἐπίκουρος Epikouros; 341–270 BC) was an ancient Greek philosopher and sage who founded Epicureanism, a highly influential school of philosophy. He was born on the Greek island of Samos to Athenian parents. Influenced by Democritus, Aristippus, Pyrrho, and possibly the Cynics, he turned against the Platonism of his day and established his own school, known as "the Garden", in Athens. Read more on Wikipedia

Epicurus is most famous for his philosophy of hedonism, which is the idea that the greatest pleasure is the absence of pain. He also believed that the soul dies with the body, and that there is no afterlife.

Page views of Epicuruses by language

Among philosophers, Epicurus ranks 23 out of 1,081. Before him are Thomas Aquinas, Georg Wilhelm Friedrich Hegel, Montesquieu, Thomas Hobbes, Democritus, and Arthur Schopenhauer. After him are Seneca the Younger, Erasmus, Auguste Comte, Friedrich Engels, Averroes, and Heraclitus.

Others Deceased in 269 BC