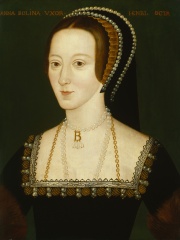 Anne Boleyn (; c. 1501 – 19 May 1536) was Queen of England from 1533 to 1536, as the second wife of King Henry VIII. The circumstances of her marriage and of her execution by beheading for treason and other charges made her a key figure in the political and religious upheaval that marked the start of the English Reformation. Anne was the daughter of Thomas Boleyn, 1st Earl of Wiltshire, and his wife, Lady Elizabeth Howard, and was educated in the Netherlands and France, largely as a maid of honour to Queen Claude of France. Read more on Wikipedia

Anne Boleyn is most famous for being the second wife of King Henry VIII of England. She was executed in 1536 on charges of treason, adultery, and incest.

Among companions, Anne Boleyn ranks 2 out of 687. Before her are Nefertiti. After her are Empress Elisabeth of Austria, Catherine de' Medici, Aisha, Helena, Catherine of Aragon, Fatimah, Empress Joséphine, Eva Braun, Khadija bint Khuwaylid, and Marie Louise, Duchess of Parma.