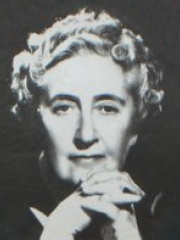 Dame Agatha Mary Clarissa Christie, Lady Mallowan, (née Miller; 15 September 1890 – 12 January 1976) was an English writer known for her sixty-six detective novels and fourteen short story collections, particularly those revolving around fictional detectives Hercule Poirot and Miss Marple. She also wrote the world's longest-running play, The Mousetrap, which was performed in the West End from 1952 to 2020, as well as six novels under the pseudonym Mary Westmacott. In 1971, she was appointed a Dame Commander of the Order of the British Empire (DBE) for her contributions to literature. Read more on Wikipedia

Since 2007, the English Wikipedia page of Agatha Christie has received more than 9,476,160 page views. Her biography is available in 123 different languages on Wikipedia making her the 30th most popular writer.

Among writers, Agatha Christie ranks 29 out of 4,883. Before her are Ovid, Albert Camus, Petrarch, Anne Frank, Charles Dickens, and Mark Twain. After her are Alexander Pushkin, Alexandre Dumas, Giovanni Boccaccio, Miguel de Cervantes, Horace, and Stendhal.