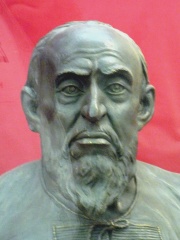 Ivan IV Vasilyevich (Russian: Ива́н Васи́льевич; 25 August 1530 – 28 March [O.S. 18 March] 1584), commonly known in English as Ivan the Terrible (from Russian: Ива́н Гро́зный​ , romanized: Ivan Grozny, lit. "Ivan the Formidable" or "Ivan the Fearsome", Latin: Ioannes Severus, monastic name: Jonah), was the grand prince of Moscow from 1533 to 1547 and the first Tsar of all Russia from 1547 to 1584. Ivan was the son of Vasili III, the Rurikid ruler of the Grand Duchy of Moscow, he was appointed grand prince after his father's death when he was three years old. Read more on Wikipedia

Ivan the Terrible was the first tsar of Russia. He was a cruel and ruthless leader who conquered the Russian people. He was most famous for his conquests, which he used to expand Russia's borders.

Page views of Ivan the Terribles by language

Among politicians, Ivan the Terrible ranks 69 out of 15,710. Before him are Benjamin Franklin, Kim Il-sung, Nebuchadnezzar II, Lorenzo de' Medici, Francisco Franco, and Ronald Reagan. After him are Richard I of England, Nicolae Ceaușescu, Nikita Khrushchev, Frederick I, Holy Roman Emperor, Selim II, and Napoleon III.