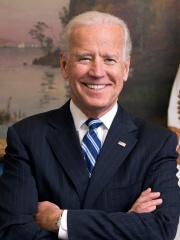 Joseph Robinette Biden Jr. (; born November 20, 1942) is an American politician who served as the 47th vice president of the United States from 2009 to 2017. A member of the Democratic Party, he served as a United States Senator for Delaware from 1973 to 2009. Read more on Wikipedia

Since 2007, the English Wikipedia page of Joe Biden has received more than 27,902,592 page views. His biography is available in 101 different languages on Wikipedia making him the 1,256th most popular politician.

CNN
Watch Joe Biden react to RBG's death
Democratic presidential nominee Joe Biden reacts to the death of Justice Ruth Bader Ginsburg.
New York Times
Joe Biden, Moderna, Martha Stewart: Your Thursday Evening Briefing
Here’s what you need to know at the end of the day.
Remy Tumin and Karen Cetinkaya
CNN
Opinion: Joe Biden showed America a different kind of leadership
For a couple of hours Thursday night, America was treated with honesty and compassion by a man who wants to hold its highest office. That could be the entire review right there, how jarring and unusual it was to visualize a president who could clear the extre…
Opinion by Jess McIntosh
CNET
Jim Carrey to play Joe Biden on SNL, new season starts Oct. 3 - CNET
Saturday Night Live will also kick off season 46 with five live shows in a row, a first in the show's history.
Bonnie Burton

Among politicians, Joe Biden ranks 1,250 out of 14,801. Before him are Albert Lebrun, Emperor Kōmei, Emperor Wen of Sui, Margaret Theresa of Spain, Scorpion I, and Libius Severus. After him are Ananda Mahidol, Ivan Mazepa, Dorgon, Yeonsangun of Joseon, Gaspard II de Coligny, and Berenice IV of Egypt.