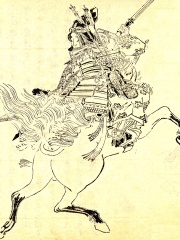 Tomoe Gozen (巴 御前 [tomo.e], c. 1157 – c. 1247) was a late twelfth-century samurai warrior (onna-bugeisha), known for her bravery. She served Minamoto no Yoshinaka in the Genpei War shogunate in Japan. Her family had strong affiliations with Yoshinaka. Read more on Wikipedia

Since 2007, the English Wikipedia page of Tomoe Gozen has received more than 636,174 page views. Her biography is available in 24 different languages on Wikipedia making her the 1,876th most popular politician.

Among politicians, Tomoe Gozen ranks 1,863 out of 14,801. Before her are Soong Ching-ling, Emperor Momozono, Eric the Victorious, Ibrahim Rugova, Yolande de Polastron, and Charles, Duke of Vendôme. After her are Ali Abdullah Saleh, Augusta Victoria of Schleswig-Holstein, Kiro Gligorov, Chlothar III, Theuderic III, and Carlos I of Portugal.

Among people born in 1157, Tomoe Gozen ranks 3. Before her are Richard I of England and Alfonso II of Aragon. After her are Leopold V, Duke of Austria and Theresa of Portugal, Countess of Flanders. Among people deceased in 1247, Tomoe Gozen ranks 1. After her are Konrad I of Masovia, Ermesinde, Countess of Luxembourg, Henry Raspe, Landgrave of Thuringia, Richard de Bures, Armand de Périgord, and Neidhart von Reuental.