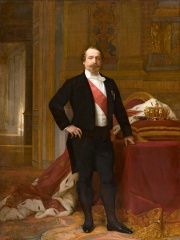 Napoleon III (Charles-Louis Napoléon Bonaparte; 20 April 1808 – 9 January 1873), the nephew of Napoleon I, was the first president of France, from 1848 to 1852, and the last French monarch, from 1852 to 1870. First elected president of the French Second Republic in 1848, he seized power by force in 1851, when he could not constitutionally be re-elected, and became the emperor of the French. He founded the Second French Empire and was its only emperor until the defeat of the French Army and his capture by Prussia and its allies in the Franco-Prussian War in 1870. Read more on Wikipedia

Among politicians, Napoleon III ranks 75 out of 15,710. Before him are Ivan the Terrible, Richard I of England, Nicolae Ceaușescu, Nikita Khrushchev, Frederick I, Holy Roman Emperor, and Selim II. After him are Franklin D. Roosevelt, Theodosius I, Mary I of England, Mehmed the Conqueror, Louis XV of France, and Osman I.