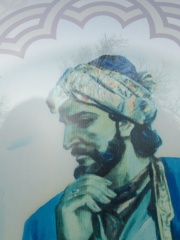 Afzal al-Dīn Badīl ibn ʿAlī ibn ʿOthmān, commonly known as Khāqānī (Persian: خاقانی‎, IPA: [xɒːɣɒːˈniː]; c. 1120 – c. 1199), was a major Persian poet and prose-writer. He was born in Transcaucasia in the historical region known as Shirvan, where he served as an ode-writer to the Shirvanshahs. His fame most securely rests upon the qasidas collected in his Divān, and his autobiographical travelogue Tohfat al-ʿErāqayn. Read more on Wikipedia

Since 2007, the English Wikipedia page of Khaqani has received more than 50,207 page views. His biography is available in 25 different languages on Wikipedia making him the 1,153rd most popular writer.

Page views of Khaqanis by language

Among writers, Khaqani ranks 1,152 out of 4,883. Before him are Babrius, August Kubizek, Quintus Smyrnaeus, Noah Gordon, John Berger, and Fatema Mernissi. After him are Gottfried Benn, Cratinus, Robert Sheckley, Adalberon, Thomas Chatterton, and Blaise Cendrars.

Among people born in 1126, Khaqani ranks 3. Before him are Averroes and William I of Sicily. After him are Mieszko III the Old, Anvari, Peter I of Courtenay, Michael the Syrian, and John Doukas. Among people deceased in 1199, Khaqani ranks 5. Before him are Richard I of England, Minamoto no Yoritomo, Stefan Nemanja, and Abu Yusuf Yaqub al-Mansur. After him are Joan of England, Queen of Sicily and Michael the Syrian.

Among WRITERS In Azerbaijan