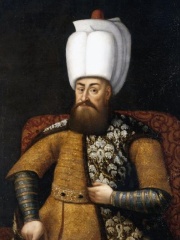 Murad III (Ottoman Turkish: مراد ثالث, romanized: Murād-i sālis; Turkish: III. Murad; 4 July 1546 – 16 January 1595) was Sultan of the Ottoman Empire from 1574 until his death in 1595. His rule saw battles with the Habsburgs and exhausting wars with the Safavids. The long-independent Morocco was at a time made a vassal of the empire but they would regain independence in 1582. Read more on Wikipedia

Murad III was the Ottoman Sultan from 1574 to 1595. He is most famous for his war with Safavid Persia and his death.

Among politicians, Murad III ranks 75 out of 15,577. Before him are Hillary Clinton, Huang Xianfan, Muammar Gaddafi, Ronald Reagan, Frederick the Great, and Darius the Great. After him are Ivan the Terrible, Richard I of England, Napoleon III, Rama, Joe Biden, and Ashoka.