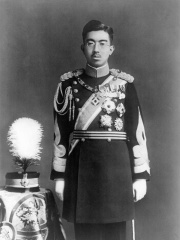 Emperor Shōwa, (昭和, 29 April 1901 – 7 January 1989) better known in English by his personal name Hirohito (裕仁), was the 124th emperor of Japan, ruling over the Empire of Japan from 1926 until 1947, after which he was Emperor of the state of Japan until his death in 1989. Hirohito and his wife, Empress Kōjun, had seven children, two sons and five daughters; he was succeeded by his fifth child and eldest son, Akihito. By 1979, Hirohito was the only monarch in the world with the title "emperor". Read more on Wikipedia

Page views of Hirohitos by language

Among politicians, Hirohito ranks 104 out of 15,710. Before him are Murad IV, Wilhelm II, German Emperor, Ivar the Boneless, Cleopatra, Herod the Great, and Muammar Gaddafi. After him are Philip IV of France, Xerxes I, Claudius, George Washington, Isabella I of Castile, and Pepin the Short.