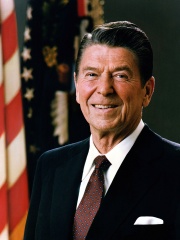 Ronald Wilson Reagan ( RAY-gən; February 6, 1911 – June 5, 2004) was an American politician who served as the 40th president of the United States from 1981 to 1989. A member of the Republican Party from 1962 onward, he also served as the 33rd governor of California from 1967 to 1975 after having a career as a Hollywood actor and union leader. Reagan was born in Tampico, Illinois. Read more on Wikipedia

Ronald Reagan was the 40th president of the United States, serving from 1981 to 1989. He is most famous for his economic policies, including supply-side economics, tax cuts, and deregulation, which are collectively known as Reaganomics.

Among politicians, Ronald Reagan ranks 72 out of 15,577. Before him are Caligula, James K. Polk, Mary I of England, Hillary Clinton, Huang Xianfan, and Muammar Gaddafi. After him are Frederick the Great, Darius the Great, Murad III, Ivan the Terrible, Richard I of England, and Napoleon III.