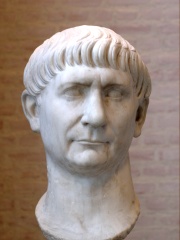 Trajan ( TRAY-jən; Latin: Caesar Nerva Trajanus; 18 September 53 – 8 August 117) was Roman emperor from 98 to 117. Officially declared by the Senate optimus princeps ("best ruler"), Trajan is remembered as a successful soldier-emperor who presided over the second-greatest military expansion in Roman history, after Augustus, leading the empire to attain its maximum territorial extent by the time of his death. Read more on Wikipedia

Trajan is most famous for his conquest of Dacia.

Page views of Trajans by language

Among politicians, Trajan ranks 52 out of 15,710. Before him are Fidel Castro, Leon Trotsky, Josip Broz Tito, Caligula, Hillary Clinton, and Vladimir Putin. After him are Hammurabi, Henry Kissinger, Akhenaten, Saddam Hussein, Franz Joseph I of Austria, and Mary, Queen of Scots.