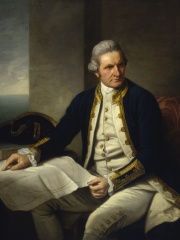 Captain James Cook (7 November 1728 – 14 February 1779) was a British explorer, navigator, cartographer, and captain in the British Royal Navy, famous for his three voyages between 1768 and 1779 in the Pacific Ocean and to Australia in particular. He made detailed maps of Newfoundland prior to making three voyages to the Pacific, during which he achieved the first recorded European contact with the eastern coastline of Australia and the Hawaiian Islands, and the first recorded circumnavigation of New Zealand. Cook joined the British merchant navy as a teenager and joined the Royal Navy in 1755. Read more on Wikipedia

James Cook was a British explorer and navigator who mapped much of the world's coastlines and discovered many islands. He is most famous for leading three expeditions to the Pacific Ocean, during which he claimed the eastern coast of Australia for Britain.

Among explorers, James Cook ranks 8 out of 405. Before him are Christopher Columbus, Ferdinand Magellan, Vasco da Gama, Amerigo Vespucci, Bartolomeu Dias, and Hernán Cortés. After him are Roald Amundsen, Ibn Battuta, Zheng He, Francis Drake, Francisco Pizarro, and Prince Henry the Navigator.