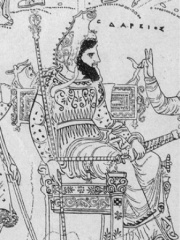 Darius I (Old Persian: 𐎭𐎠𐎼𐎹𐎺𐎢𐏁, romanized: Dārayava(h)uš; New Persian: داریوش Dāryuš; Hebrew: דָּרְיָוֶשׁ‎, Modern: Darəyaveš, Tiberian: Dāreyāweš; c. 550 – 486 BCE), commonly known as Darius the Great, was the third Persian King of Kings of the Achaemenid Empire, reigning from 522 BCE until his death in 486 BCE. He ruled the empire at its peak, when it included much of West Asia, parts of the Caucasus, parts of the Balkans (Thrace-Macedonia, and Paeonia), most of the Black Sea coastal regions, Central Asia, as far as the Indus Valley in the far east and portions of north and northeast Africa including Egypt (Mudrâya), eastern Libya, and coastal Sudan.Darius ascended the throne by overthrowing the legitimate Achaemenid monarch Bardiya, whom he later fabricated to be an imposter named Gaumata. The new king met with rebellions throughout his kingdom and quelled them each time. Read more on Wikipedia

Darius the Great was a Persian emperor who ruled from 522 to 486 BC. He is most famous for his military campaigns, which led to the expansion of the Persian Empire and its dominance over the ancient world.

Page views of Darius the Greats by language

Among politicians, Darius the Great ranks 91 out of 15,710. Before him are Margaret Thatcher, Heinrich Himmler, Ashoka, Mary II of England, Hadrian, and Tiberius. After him are Ahmed I, Boris Yeltsin, Philip II of Spain, Philip II of Macedon, Giuseppe Garibaldi, and Leonid Brezhnev.

Others Deceased in 486 BC