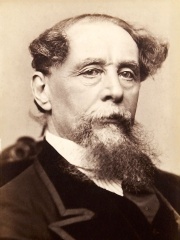 Charles John Huffam Dickens (; 7 February 1812 – 9 June 1870) was an English writer and social critic. He created some of the world's best-known fictional characters and is regarded by many as the greatest novelist of the Victorian era. His works enjoyed unprecedented popularity during his lifetime and, by the 20th century, critics and scholars had recognised him as a literary genius. Read more on Wikipedia

Charles Dickens is most famous for his novels such as "A Christmas Carol" and "Oliver Twist".

Among writers, Charles Dickens ranks 31 out of 5,755. Before him are Petrarch, Anne Frank, Giovanni Boccaccio, Rumi, Honoré de Balzac, and Ernest Hemingway. After him are Horace, Alexandre Dumas, Aeschylus, Oscar Wilde, George Orwell, and Alexander Pushkin.