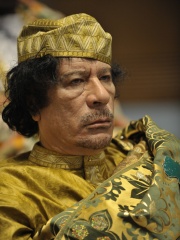 Muammar Muhammad Abu Minyar al-Gaddafi (Arabic: مُعمّر محمد عبد السلام القذّافي, c. 1942 – 20 October 2011) was a Libyan revolutionary, politician and political theorist. He was the de facto leader of Libya from 1969 to 2011, first as Revolutionary Chairman of the Libyan Arab Republic from 1969 to 1977 and then as the Brotherly Leader of the Great Socialist People's Libyan Arab Jamahiriya from 1977 to 2011. Read more on Wikipedia

Muammar Gaddafi ruled Libya for more than 40 years. He was overthrown and killed in 2011 during the Libyan Civil War.

Among politicians, Muammar Gaddafi ranks 71 out of 15,577. Before him are Margaret Thatcher, Caligula, James K. Polk, Mary I of England, Hillary Clinton, and Huang Xianfan. After him are Ronald Reagan, Frederick the Great, Darius the Great, Murad III, Ivan the Terrible, and Richard I of England.