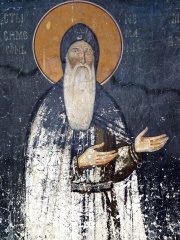 Stefan Nemanja (Serbian Cyrillic: Стефан Немања, pronounced [stêfaːn ně̞maɲa]; c. 1113 or 1114 – 13 February 1199) was the Grand Prince (Veliki Župan) of the Serbian Grand Principality (also known as Raška, lat. Rascia) from 1166 to 1196. A member of the Vukanović dynasty, Nemanja founded the Nemanjić dynasty, and is remembered for his contributions to Serbian culture and history, founding what would evolve into the Serbian Empire, as well as the national church. Read more on Wikipedia

Among politicians, Stefan Nemanja ranks 1,754 out of 15,710. Before him are Charles II of Naples, Robert, Count of Clermont, Frederick Henry, Prince of Orange, Arghun, Liu Shan, and Nelson Rockefeller. After him are Simeon Saxe-Coburg-Gotha, Kamose, Oruç Reis, Pyotr Stolypin, Ernest I, Duke of Saxe-Coburg and Gotha, and Ma Chao.

Among people born in 1113, Stefan Nemanja ranks 2. Before him is Geoffrey Plantagenet, Count of Anjou. After him are Everard des Barres, Joscelin II, Count of Edessa, Henry IV, Count of Luxembourg, and Isaac Komnenos. Among people deceased in 1199, Stefan Nemanja ranks 3. Before him are Richard I of England and Minamoto no Yoritomo. After him are Abu Yusuf Yaqub al-Mansur, Khaqani, Joan of England, Queen of Sicily, Geng Ding, and Michael the Syrian.