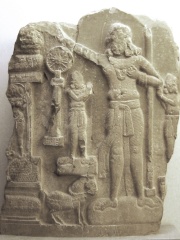 Ashoka (; Brāhmi: 𑀅𑀲𑁄𑀓, Asoka, IAST: Aśoka), also known as Ashoka the Great, was an Indian emperor of the Maurya Dynasty, son of Bindusara, who ruled almost all of the Indian subcontinent from c. 268 to 232 BCE. Ashoka promoted the spread of Buddhism across ancient Asia. Considered by many to be one of India's greatest emperors, Ashoka expanded Chandragupta's empire to reign over territory stretching from present-day Afghanistan in the west to present-day Bangladesh in the east. It covered the entire Indian subcontinent except for parts of present-day Tamil Nadu, Karnataka, and Kerala. Read more on Wikipedia

Ashoka was an Indian emperor who ruled the Mauryan Empire from 269 BC to 232 BC. He is most famous for his conversion to Buddhism and the creation of a Buddhist empire.

Page views of Ashokas by language

Among politicians, Ashoka ranks 87 out of 15,710. Before him are Osman I, Selim I, James K. Polk, Henry IV of France, Margaret Thatcher, and Heinrich Himmler. After him are Mary II of England, Hadrian, Tiberius, Darius the Great, Ahmed I, and Boris Yeltsin.

Others Deceased in 232 BC