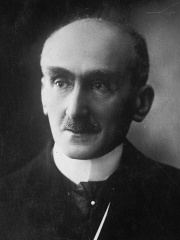 Henri-Louis Bergson (French: [bɛʁksɔn]; 18 October 1859 – 4 January 1941) was a French philosopher who was influential in the tradition of analytic philosophy and continental philosophy, especially during the first half of the 20th century until the Second World War, but also after 1966 when Gilles Deleuze published Le Bergsonisme. Bergson is known for his arguments that processes of immediate experience and intuition are more significant than abstract rationalism and science for understanding reality. He was awarded the 1927 Nobel Prize in Literature "in recognition of his rich and vitalizing ideas and the brilliant skill with which they have been presented". Read more on Wikipedia

Henri Bergson was a French philosopher who wrote about the nature of time and consciousness. His most famous work is "Creative Evolution."

Among philosophers, Henri Bergson ranks 50 out of 1,089. Before him are Thomas More, Al-Farabi, Michel Foucault, Karl Popper, Protagoras, and Hannah Arendt. After him are Plotinus, Zeno of Elea, John Amos Comenius, Mikhail Bakunin, Lucretius, and Empedocles.