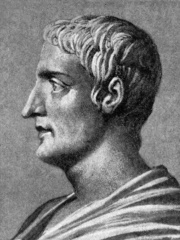 Publius Cornelius Tacitus ( TASS-it-əs, Latin: [ˈtakɪtʊs]; c. AD 56 – c. 120) was a Roman historian and politician. Tacitus is widely regarded as one of the greatest Roman historians by modern scholars.He lived in what has been called the Silver Age of Latin literature, and has a reputation for the brevity and compactness of his Latin prose, as well as for his penetrating insights into the psychology of power politics.The surviving portions of his two major works—the Annals (Latin: Annales) and the Histories (Latin: Historiae)—examine the reigns of the emperors Tiberius, Claudius, Nero, and those who reigned in the Year of the Four Emperors (69 AD). These two works span the history of the Roman Empire from the death of Augustus, in 14 AD, to 70 AD in the First Jewish–Roman War of 66–73. Read more on Wikipedia

Tacitus is most famous for writing the Annals of Imperial Rome, a set of books that chronicle the history of Rome from the death of Augustus in 14 AD to the death of Nero in 68 AD.

Page views of Tacituses by language

Among historians, Tacitus ranks 5 out of 341. Before him are Herodotus, Ibn Khaldun, Thucydides, and Sima Qian. After him are Livy, Xenophon, Josephus, Polybius, Suetonius, Alexis de Tocqueville, and Diodorus Siculus.