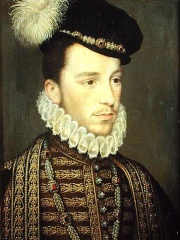 Henry III (French: Henri III, né Alexandre Édouard; Polish: Henryk Walezy; Lithuanian: Henrikas Valua; 19 September 1551 – 2 August 1589) was King of France from 1574 until his death in 1589, as well as King of Poland and Grand Duke of Lithuania from 1573 to 1575. As the fourth son of King Henry II of France, he was not expected to inherit the French throne and thus was a good candidate for the vacant throne of the Polish–Lithuanian Commonwealth, where he was elected monarch in 1573. During his brief rule, he signed the Henrician Articles into law, recognizing the Polish nobility's right to freely elect their monarch. Read more on Wikipedia

Page views of Henry III of Frances by language

Among politicians, Henry III of France ranks 155 out of 15,710. Before him are Augusto Pinochet, Murad I, Caracalla, Joseph Goebbels, Oliver Cromwell, and Pol Pot. After him are Ho Chi Minh, Demosthenes, Batu Khan, Brutus the Younger, Cyrus the Great, and Joanna of Castile.