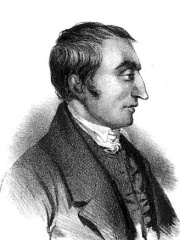 Claude Henri de Rouvroy, comte de Saint-Simon, often referred to as Henri de Saint-Simon (French: [ɑ̃ʁi də sɛ̃ simɔ̃]; 17 October 1760 – 19 May 1825), was a French political, economic and socialist theorist and businessman whose thought had a substantial influence on politics, economics, sociology and the philosophy of science. He is a younger relative of the famous memoirist the Duc de Saint-Simon. Saint-Simon created a political and economic ideology known as Saint-Simonianism that claimed that the needs of an industrial class, which he also referred to as the working class, needed to be recognized and fulfilled to have an effective society and an efficient economy. Read more on Wikipedia

Henri de Saint-Simon is most famous for his ideas of technocracy, where the economy would be controlled by a select group of scientists and engineers.

Among people born in 1760, Henri de Saint-Simon ranks 3. Before him are Hokusai and Pope Leo XII. After him are Jiaqing Emperor, Luigi Cherubini, François-Noël Babeuf, Camille Desmoulins, Claude Joseph Rouget de Lisle, Johan Gadolin, Alexandre de Beauharnais, August Neidhardt von Gneisenau, and Johann I Joseph, Prince of Liechtenstein. Among people deceased in 1825, Henri de Saint-Simon ranks 4. Before him are Jacques-Louis David, Alexander I of Russia, and Antonio Salieri. After him are Maximilian I Joseph of Bavaria, Ferdinand I of the Two Sicilies, Henry Fuseli, Jean Paul, Pauline Bonaparte, Laskarina Bouboulina, Dmitry Bortniansky, and Vivant Denon.