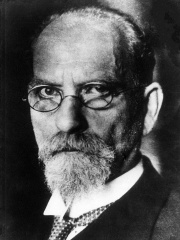 Edmund Gustav Albrecht Husserl ( HUUSS-url, US also HUUSS-ər-əl, German: [ˈɛtmʊnt ˈhʊsɐl]; 8 April 1859 – 27 April 1938) was a German philosopher and mathematician who established the school of phenomenology. In his early work, he elaborated critiques of historicism and of psychologism in logic based on analyses of intentionality. In his mature work, he sought to develop a systematic foundational science based on the so-called phenomenological reduction. Read more on Wikipedia

Edmund Husserl is most famous for his work in phenomenology, which is the study of the structures of consciousness.

Among philosophers, Edmund Husserl ranks 60 out of 1,081. Before him are Lucretius, Plotinus, Henri Bergson, Anaxagoras, Herbert Spencer, and Mikhail Bakunin. After him are Gorgias, Pliny the Elder, Ludwig Feuerbach, Peter Abelard, George Berkeley, and Johann Gottlieb Fichte.

Among PHILOSOPHERS In Czechia