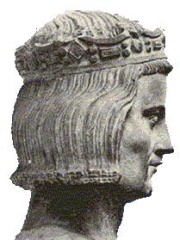 Louis IX (25 April 1214 – 25 August 1270), commonly known as Saint Louis or Louis the Saint, was king of France from 1226 to 1270. Louis was crowned in Reims at the age of 12, following the death of his father Louis VIII; his mother, Blanche of Castile, ruled the kingdom as regent until he reached maturity, and then remained his valued adviser until her death. During Louis's childhood, Blanche dealt with the opposition of rebellious vassals and obtained a definitive victory in the Albigensian Crusade, which had started 20 years earlier. Read more on Wikipedia

Louis IX of France is most famous for being a devout Catholic, and for leading the Seventh Crusade.

Page views of Louis IX of Frances by language

Among politicians, Louis IX of France ranks 195 out of 15,710. Before him are Domitian, Francis II of France, Edward VI of England, Harun al-Rashid, George VI, and Heraclius. After him are George H. W. Bush, Osman II, Muawiyah I, Anwar Sadat, Frederick the Great, and Silvio Berlusconi.