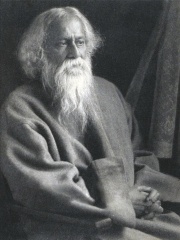 Rabindranath Tagore ( (listen); born Robindronath Thakur, 7 May 1861 – 7 August 1941), also known by his pen name Bhanu Singha Thakur (Bhonita), and also known by his sobriquets Gurudev, Kabiguru, and Biswakabi, was a polymath, poet, musician, and artist from the Indian subcontinent. He reshaped Bengali literature and music, as well as Indian art with Contextual Modernism in the late 19th and early 20th centuries. Author of the "profoundly sensitive, fresh and beautiful verse" of Gitanjali, he became in 1913 the first non-European to win the Nobel Prize in Literature. Read more on Wikipedia

Since 2007, the English Wikipedia page of Rabindranath Tagore has received more than 10,198,935 page views. His biography is available in 144 different languages on Wikipedia making him the 65th most popular writer.