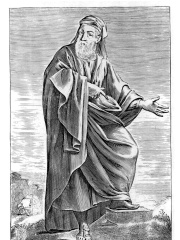 Empedocles (; Greek: Ἐμπεδοκλῆς; c. 494 – c. 434 BC, fl. 444–443 BC) was a Greek pre-Socratic philosopher and a native citizen of Akragas, a Greek city in Sicily. Empedocles' philosophy is best known for originating the cosmogonic theory of the four classical elements. Read more on Wikipedia

Empedocles is most famous for his theory of the four elements. He believed that everything was made up of four elements: earth, water, air, and fire.

Page views of Empedocles by language

Among philosophers, Empedocles ranks 50 out of 1,081. Before him are Michel de Montaigne, Origen, Al-Farabi, Ludwig Wittgenstein, John Amos Comenius, and Zeno of Elea. After him are Karl Popper, Michel Foucault, Hannah Arendt, Lucretius, Plotinus, and Henri Bergson.

Among people born in 490 BC, Empedocles ranks 3. Before him are Phidias and Zeno of Elea. After him are Nehemiah, Bacchylides, Archelaus I of Macedon, Agis II, Hellanicus of Lesbos, Ion of Chios, Nepherites I, Oenopides, and Crateuas of Macedon. Among people deceased in 430 BC, Empedocles ranks 2. Before him is Phidias. After him are Melissus of Samos, Lucius Quinctius Cincinnatus, and Archelaus.

Others Deceased in 430 BC