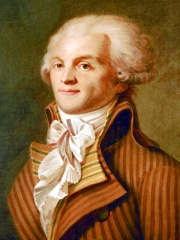 Maximilien François Marie Isidore de Robespierre (French: [mak.si.mi.ljɛ̃ fʁɑ̃.swa ma.ʁi i.zi.dɔʁ də ʁɔ.bɛs.pjɛʁ]; 6 May 1758 – 28 July 1794) was a French lawyer and statesman who was one of the best-known and most influential figures of the French Revolution. As a member of the Constituent Assembly and the Jacobin Club, he campaigned for universal manhood suffrage and the abolition both of celibacy for the clergy, and slavery. In 1791, Robespierre became an outspoken advocate for the citizens without a political voice, for their unrestricted admission to the National Guard, to public offices, and for the right to carry arms in self-defence. Read more on Wikipedia

Since 2007, the English Wikipedia page of Maximilien Robespierre has received more than 4,906,073 page views. His biography is available in 89 different languages on Wikipedia making him the 162nd most popular politician.