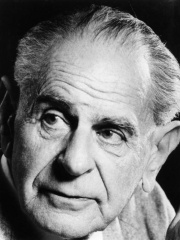 Sir Karl Raimund Popper (28 July 1902 – 17 September 1994) was an Austrian-British philosopher, academic and social commentator. One of the 20th century's most influential philosophers of science, Popper is known for his rejection of the classical inductivist views on the scientific method in favour of empirical falsification. According to Popper, a theory in the empirical sciences can never be proven, but it can be falsified, meaning that it can (and should) be scrutinised with decisive experiments. Read more on Wikipedia

Since 2007, the English Wikipedia page of Karl Popper has received more than 3,297,969 page views. His biography is available in 85 different languages on Wikipedia (up from 80 in 2019). Karl Popper is the 51st most popular philosopher (down from 47th in 2019), the 14th most popular biography from Austria and the 2nd most popular Philosopher.

Karl Popper is most famous for his idea of falsification. He argued that for a theory to be scientific, it must be falsifiable, or capable of being proven false.

Among philosophers, Karl Popper ranks 51 out of 1,081. Before him are Origen, Al-Farabi, Ludwig Wittgenstein, John Amos Comenius, Zeno of Elea, and Empedocles. After him are Michel Foucault, Hannah Arendt, Lucretius, Plotinus, Henri Bergson, and Anaxagoras.

Among PHILOSOPHERS In Austria