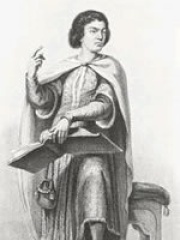 Peter Abelard (; French: Pierre Abélard; Latin: Petrus Abaelardus or Abailardus; c. 1079 – 21 April 1142) was a medieval French scholastic philosopher, leading logician, theologian, teacher, musician, composer, and poet.In philosophy he is celebrated for his logical solution to the problem of universals via nominalism and conceptualism and his pioneering of intent in ethics. Often referred to as the “Descartes of the twelfth century”, he is considered a forerunner of Rousseau, Kant, and Spinoza. He is sometimes credited as a chief forerunner of modern empiricism.In history and popular culture, he is best known for his passionate and tragic love affair and intense philosophical exchange with his brilliant student and eventual wife, Héloïse d'Argenteuil. Read more on Wikipedia

Peter Abelard is most famous for his work as a philosopher and theologian in the 12th century. He was also a poet, mathematician, and a leading figure in the medieval intellectual movement known as scholasticism.

Among philosophers, Peter Abelard ranks 59 out of 1,089. Before him are John Amos Comenius, Mikhail Bakunin, Lucretius, Empedocles, Pliny the Elder, and Anaximander. After him are Johann Gottlieb Fichte, George Berkeley, Ludwig Feuerbach, Rudolf Steiner, Arius, and Edmund Husserl.