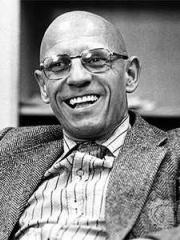 Paul-Michel Doria Foucault (UK: FOO-koh, US: foo-KOH; French: [pɔl miʃɛl fuko]; 15 October 1926 – 25 June 1984) was a French philosopher, historian of ideas, writer, political activist, and literary critic. Foucault's theories primarily address the relationship between power and knowledge, and how they are used as a form of social control through societal institutions. Though often cited as a post-structuralist and postmodernist, Foucault rejected these labels. Read more on Wikipedia

Michel Foucault is most famous for his work on the history of society and the human sciences.

Among philosophers, Michel Foucault ranks 46 out of 1,089. Before him are Ludwig Wittgenstein, Maria Montessori, Parmenides, Origen, Thomas More, and Al-Farabi. After him are Karl Popper, Protagoras, Hannah Arendt, Henri Bergson, Plotinus, and Zeno of Elea.