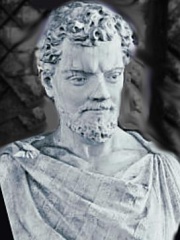 Titus Lucretius Carus ( TY-təs loo-KREE-shəs, Latin: [ˈtɪ.tʊz lʊˈkreː.tɪ.ʊs ˈkaː.rʊs]; c. 99 – c. 55 BC) was a Roman poet and philosopher. His only known work is the philosophical poem De rerum natura, a didactic work about the tenets and philosophy of Epicureanism, and which usually is translated into English as On the Nature of Things—and somewhat less often as On the Nature of the Universe. Lucretius has been credited with originating the concept of the three-age system that was formalised in 1836 by C. J. Read more on Wikipedia

Lucretius is most famous for his poem "De Rerum Natura" which is a long didactic poem about the nature of the universe and the development of life.

Page views of Lucretiuses by language

Among philosophers, Lucretius ranks 54 out of 1,081. Before him are John Amos Comenius, Zeno of Elea, Empedocles, Karl Popper, Michel Foucault, and Hannah Arendt. After him are Plotinus, Henri Bergson, Anaxagoras, Herbert Spencer, Mikhail Bakunin, and Edmund Husserl.

Others Born in 94 BC

Others Deceased in 55 BC