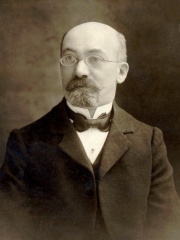 Ludwik Lejzer Zamenhof (Esperanto: Ludoviko Lazaro Zamenhof; Yiddish: אליעזר לודוויג זאַמענהאָף‎‎; 15 December [O.S. 3 December] 1859 – 14 April [O.S. 1 April] 1917) was a Polish ophthalmologist, linguist and the inventor of the international language Esperanto, the most widely used constructed international auxiliary language in the world.Zamenhof first developed the language in 1873 while still in school. He grew up fascinated by the idea of a world without war. He believed that this could happen with the help of a new international auxiliary language. Read more on Wikipedia

Since 2007, the English Wikipedia page of L. L. Zamenhof has received more than 426,862 page views. His biography is available in 100 different languages on Wikipedia making him the 8th most popular physician.

Among physicians, L. L. Zamenhof ranks 7 out of 438. Before him are Hippocrates, Paracelsus, Galen, Florence Nightingale, Josef Mengele, and Willem Einthoven. After him are Basil of Caesarea, Robert Koch, Albert Schweitzer, Edward Jenner, Andreas Vesalius, and Muhammad ibn Zakariya al-Razi.

Among PHYSICIANS In Poland