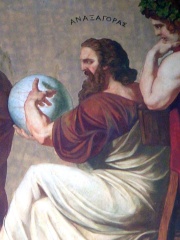 Anaxagoras (; Greek: Ἀναξαγόρας, Anaxagóras, "lord of the assembly"; c.  500 – c.  428 BC) was a Pre-Socratic Greek philosopher. Born in Clazomenae at a time when Asia Minor was under the control of the Persian Empire, Anaxagoras came to Athens. According to Diogenes Laërtius and Plutarch, in later life he was charged with impiety and went into exile in Lampsacus; the charges may have been political, owing to his association with Pericles, if they were not fabricated by later ancient biographers.Responding to the claims of Parmenides on the impossibility of change, Anaxagoras described the world as a mixture of primary imperishable ingredients, where material variation was never caused by an absolute presence of a particular ingredient, but rather by its relative preponderance over the other ingredients; in his words, "each one is... Read more on Wikipedia

Anaxagoras was most famous for his theory that the sun is a red-hot stone, and that the moon is made of earth.

Page views of Anaxagoras by language

Among philosophers, Anaxagoras ranks 74 out of 1,089. Before him are Karl Jaspers, Antonio Gramsci, William of Ockham, Jürgen Habermas, Friedrich Wilhelm Joseph Schelling, and Jeremy Bentham. After him are Roger Bacon, Claude Lévi-Strauss, Epictetus, Zeno of Citium, Xenophanes, and Giovanni Pico della Mirandola.

Others Deceased in 428 BC