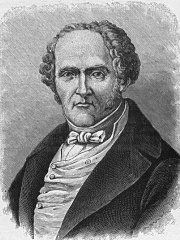 François Marie Charles Fourier (;French: [ʃaʁl fuʁje]; 7 April 1772 – 10 October 1837) was a French philosopher, an influential early socialist thinker and one of the founders of utopian socialism. Some of Fourier's social and moral views, held to be radical in his lifetime, have become mainstream thinking in modern society. For instance, Fourier is credited with having originated the word feminism in 1837.Fourier's social views and proposals inspired a whole movement of intentional communities. Read more on Wikipedia

Charles Fourier was a French philosopher and social reformer. He is most famous for his theory of the four phases of society, which he believed were the "Asiatic," "Aquatic," "Feminine," and "Industrial."

Among people born in 1772, Charles Fourier ranks 3. Before him are David Ricardo and Novalis. After him are William I of the Netherlands, Friedrich Schlegel, Maria Theresa of Naples and Sicily, Samuel Taylor Coleridge, Ram Mohan Roy, Étienne Geoffroy Saint-Hilaire, Nachman of Breslov, Fath-Ali Shah Qajar, and Louis Antoine, Duke of Enghien. Among people deceased in 1837, Charles Fourier ranks 3. Before him are Alexander Pushkin and William IV of the United Kingdom. After him are Gustav IV Adolf of Sweden, John Constable, Hortense de Beauharnais, Johann Nepomuk Hummel, Georg Büchner, Giacomo Leopardi, François Gérard, Wilhelmine of Prussia, Queen of the Netherlands, and John Field.