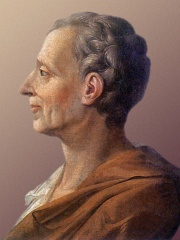 Charles Louis de Secondat, Baron de La Brède et de Montesquieu (; French: [mɔ̃tɛskjø]; 18 January 1689 – 10 February 1755), generally referred to as simply Montesquieu, was a French judge, man of letters, historian, and political philosopher. He is the principal source of the theory of separation of powers, which is implemented in many constitutions throughout the world. He is also known for doing more than any other author to secure the place of the word "despotism" in the political lexicon. His anonymously published The Spirit of Law (1748), which was received well in both Great Britain and the American colonies, influenced the Founding Fathers of the United States in drafting the U.S. Read more on Wikipedia

Montesquieu is most famous for his work "The Spirit of the Laws," which is considered to be one of the most influential works in the history of political philosophy.

Page views of Montesquieus by language

Among philosophers, Montesquieu ranks 18 out of 1,089. Before him are Augustine of Hippo, John Locke, Francis Bacon, Pythagoras, Thomas Aquinas, and Georg Wilhelm Friedrich Hegel. After him are Arthur Schopenhauer, Thomas Hobbes, Epicurus, Heraclitus, Baruch Spinoza, and Erasmus.